The Attack on the Rabbits 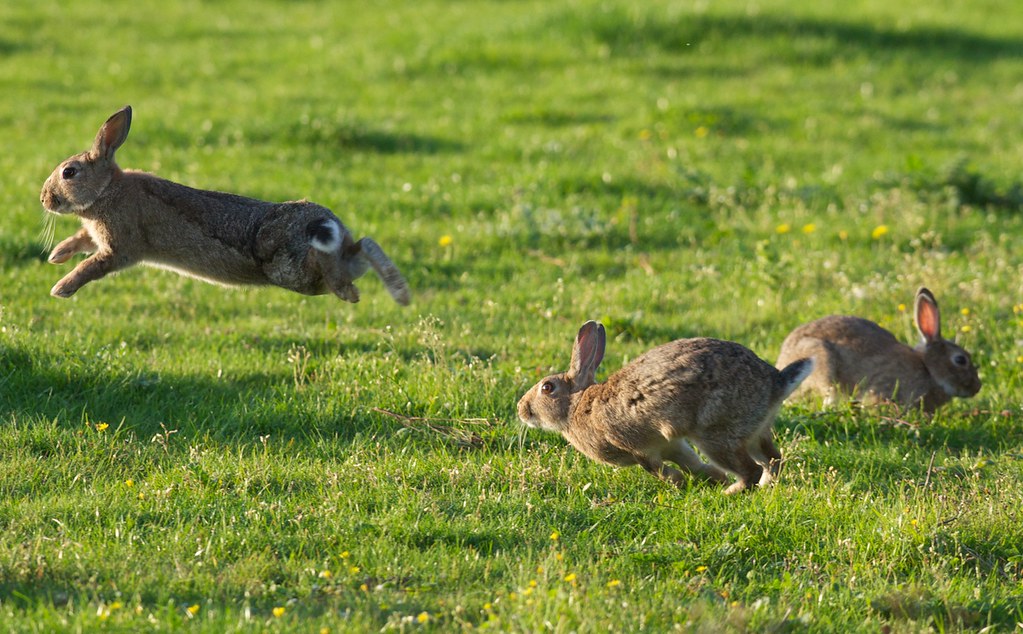 Two of my Creative Writing students, Manvik and Sayan, were inspired to collaborate on this story after learning the vocabulary in this article. Enjoy!

“Congratulations, Sam, you finally learned how to binky!” my mother says. William, my rude younger brother, snickers, “I learned how to binky many years ago.” My other brother Henry laughs out loud. By the way, I am a rabbit. My brothers despise me because I get a bit more attention from my parents. I have a very kind mother and father.  I am three years old, and I am a very special rabbit.

For example, I only recently learned how to binky, but other rabbits can do these large jumps right after they are born. Instead, I was making a strange movement of twirling before I was encouraged to binky by an older rabbit. He told me that wolves would catch me if I didn’t learn how to move quickly. My mother says to William that he must keep quiet and respect the fact that I had finally learned how to binky.

My great and protective father says, “To celebrate this achievement, we will go for a nice stroll with our whole family.” We have almost 20 relatives.

I say, “I will practice binkying in the meantime.” So our big family of rabbits head out on a stroll. The wise old rabbit who encouraged me to binky tells me, ”Just remember to keep binkying, Sam, for binkying can save any rabbit from the wolves. It is a good thing that you finally dropped your twirling act.”

William comments, “I think Sam will get injured during the stroll and get eaten up by the wolves.”

A rabbit answers, “The wolves are fierce predators that have big gritting teeth and big bodies. They have no wisdom, and they are big bullies of the forest. They are greedy and selfish creatures, and they care only about themselves. We, on the other hand, care for all the creatures in our forest and produce medicines for all.”

“Making medicine is our hobby,” say the other rabbits in unison. We all eat berries and enjoy a great stroll.

All the creatures in the forest call us fearless and selfish. Suddenly our leader bays, telling us that he sees a buffalo herd. Our wolf pack is hungry so we start the hunt. He commands, “Follow me.” While we start chasing the buffalo, our leader falls and gets hurt. He tries to bend down and cries in agony, “Keep going. I’ll be okay.”

Because I am the second oldest wolf, I am now the leader. Our pack keeps moving. We almost catch up to the buffalo herd, but then a wolf howls and the rest of the pack joins in. I tell them to keep moving, but even I can’t resist the urge to howl with them. After all the howling is over, the buffalo herd is long gone. I warn them to never lose focus during a hunt ever again.

“Our leader is hurt. We have to get him food quickly. Follow me. I smell rabbit,” I announce. Right when the rabbits see us, they start hopping away quickly. It looks like one of them is twirling. I tell them to hunt the special one.

The other wolves ask me why. I reply impatiently, “We always hunt the weak ones.” We start chasing the rabbit.

We were having a great time until–“WE’RE UNDER ATTACK!!!” shouts one of the rabbits. He had spotted a wolf pack. I am so nervous and do not have much practice binkying, so I twirl as fast as I can.  All the rabbits are going faster and I am lagging behind. The wolves are gaining on me, and the rest of the rabbits keep moving.

The wolves are about to make a meal of me, and then my mother rescues me. She says, “Remember to binky! It can save your life!” We winky away from the wolves to safety.

Then we see a dying wolf in the forest. He says in agony, “Can somebody give me some food and medicine for my injury? Otherwise, I will die!” None of us bother to give him food or our precious medicine.

An elder rabbit exclaims, “Why should we give you anything when you always try to kill us and other creatures?”

The dying wolf says, “We were trying to hunt buffalo but we failed, and we desperately needed food, so we tried to hunt you instead.”

Many rabbits feel bad for the wolf and decide to help him, but right then, the wolves pounce on us. We hop away just in time, binkying into our den. My mother checks that everyone has made it safely to the den. We are safe for now.

We aren’t able to save our leader in time. Maybe we should have talked the rabbits into giving us one of their medicines, instead of brutally attacking them many times for food. I remember that our leader once told us they have many secrets.  We feel very disappointed and foolish.

Desperately, I tell the pack to sleep. I finally realize how being cruel and mean to other creatures can have an impact to our wolf pack. It is going to be very hard to change the way we behave.

After some time, we feel that we made the right decision to turn into good animals. Those rabbits changed our lives, and we shall never eat a rabbit again.

How foolish the wolves are. Their leader was sick but instead of asking us to give them medicine, they attacked us. We have a surplus amount of medicines for any sickness.

“Well, Sam, you learned a lesson,” my mother says. “Today, you saw first-hand why it is important to winky instead of twirl.”

“Now why don’t you practice binkying some ore?” says my father. ”You and I should start practicing how to hop at great speeds during times of need, such as this wolf attack.”

One week later, after we swore never to eat rabbits again, we visit the rabbit den and say, “We are terribly sorry for attacking you last week. We shall never harm your species again.”

The wisest rabbit knows that we are telling the truth and says, “Let’s be friends forever.”